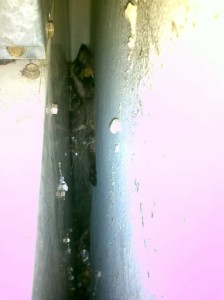 Dead Animal Removal Murfreesboro, Smyrna TN,  La Vergne TN for expert removal of dead critters from attics, walls, crawlspaces, lawns or other areas that a animal may have died. Have you tried calling the local city animal removal services only to find they WILL NOT come to your home and remove your problem? It’s a common occurrence and Dead Animal Pick-Up Service is here to help.  We remove everything dead such as departed dead dog/cat on lawns or under homes to a decaying squirrel or raccoon in an attic. We offer our specialized dead animal removal in Murfreesboro, Smyrna TN,  La Vergne, Nolensville, Antioch, Mt Juliet, Lebanon, Gallatin & the rest of The Greater Nashville area. We know how to find and remove your stinky dead critter with minimal damage or mess! Your dead critter removal company understands the stress and aggravation of having an unlucky intruder dying in an inaccessible location in a wall or void and stinking up your whole house. We use everything we have available such as scopes to get your dead animal out cost effectively and with minimal damage so to not cause you further grief. Once we remove your dead raccoon, squirrel, bird or other carcass from under your home, attic, crawlspace chimney, stove pipe or flu  your Dead Animal Removal Co of Murfreesboro, Smyrna TN,  La Vergne TN knows how to rid the area of dead animal odors quickly,  seal up and prevent the stinky problem from ever occurring again!

When you call with your dead animal problem be prepared to tell us information such as:

Dead Animal Removal Co. Murfreesboro, Smyrna TN & La Vergne are not limited to removing just dead rats from walls or a foul deceased skunk under a house or porch in Nolensville, TN. We are equipped and ready to handle any dead animal situation our Nashville residents face. We don’t mind the stinky difficult jobs such as the removal of a large deceased canine under your home that has a tight squeeze. We offer a complete clean-up and dead animal odor removal service alongside your dead dog or cat problem to eliminate any odors that will linger for some time after the dead animal has been extracted/removed. After that has been performed we will gladly offer to seal up any entrances that allowed the dead critter to get into the area it passed away in to prevent any future problems. So if you’ve called your local city services for dead animal removal in  Nashville only to get told “No! We do not do dead animal removals on private property” then you’ve found the right guys for your Nashville dead animal removal problem!

NO GIMMICKS! No “Special Chemical” that only masks odors with another smell or promise to get ride of it instantly. We only use the most potent high strength  dead animal odor binding/eliminating agents and equipment on the market when giving a dead animal removal odor control service after a deceased critter has been removed along with as much as its surroundings as possible*. If you do choose to have a “air freshener” for dead odors we are more than happy to offer the best in the market specifically designed for masking dead animal odors. On REALLY foul smelling dead carcass odor jobs it make take more than one treatment to tell a difference. Nashville Wildlife Removal offers Dead Animal Odor Removal under/in homes crawlspace, attics, walls, chimneys in Nashville, TN as well as Brentwood & Belle Meade, TN and just about anywhere else you may find a deceased critter.

Often times a raccoon, bird or innocent squirrel will get off in a chimney and can’t  find or climb its way out. Sometimes even a mother raccoon will have her offspring in the comforts of a chimney, flu or stove pipe and die on the outside or maybe a untrained & careless Nuisance Wildlife Removal Company trapped raccoon for you and was careless enough to not check the chimney. When this happens the baby raccoons are left to fend for themselves and eventually dying in your uncapped chimney.  The result of this happening of the critter dying can be an unbearable terrible odor. So when this happens, hire a skilled, qualified, professional animal removal company and save yourself some real money in the long run!

Dead animals are dangerous to remove without the proper safety equipment and training. This is because the animal died for a reason,  they could have been host to many communicable diseases such as Rabies or even the Plague. For a better detailed list of diseases that animals carry see this link. Dead Animal Removal Nolensville La Vergne TN Donelson Antioch Nashville TN can not only remove the deceased animal such as a dog or raccoon we can remove soil or replace material around the site the you, your family and pets exposure and odor. Dead animal/soil removal is very important because of harmful bacteria that a dead animal carcass can leave behind in your Nashville or Middle Tennessee area home.